This page shows all the photos I have taken in 2015. Click on the subject line/date in bold, to view the full album. Please do let me know of any broken links. 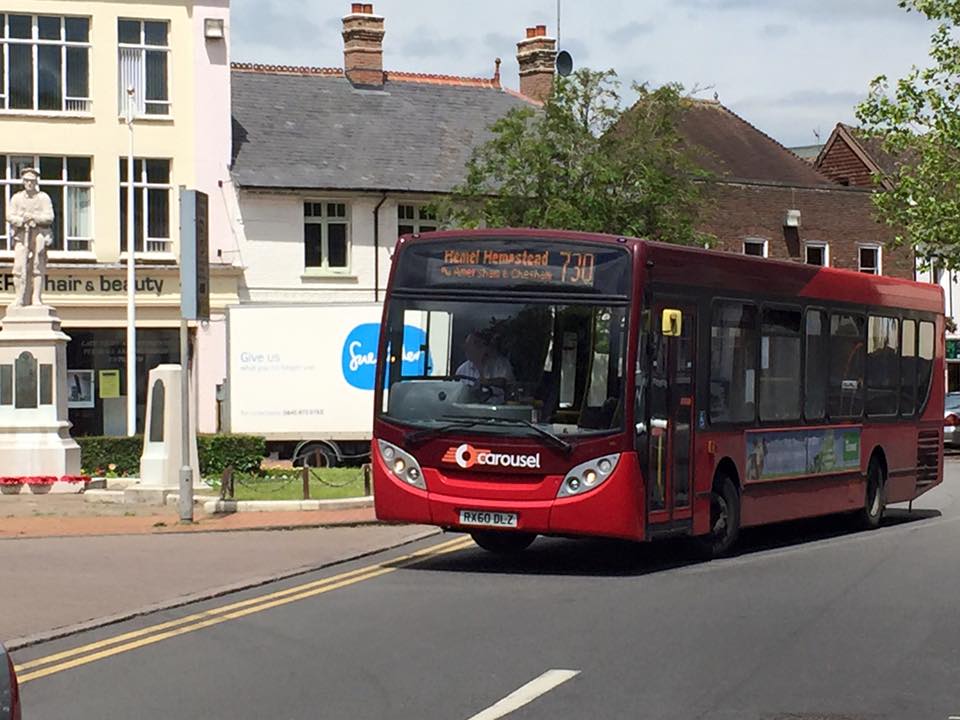 Caroline went to Chesham with a colleague to see a new acquisition, so jumped at the chance to go! Lots changed in buses and the Met Line trains go through to central London all day- and have been replaced! Some photos from Broadway, High Street, and Chesham tube station. 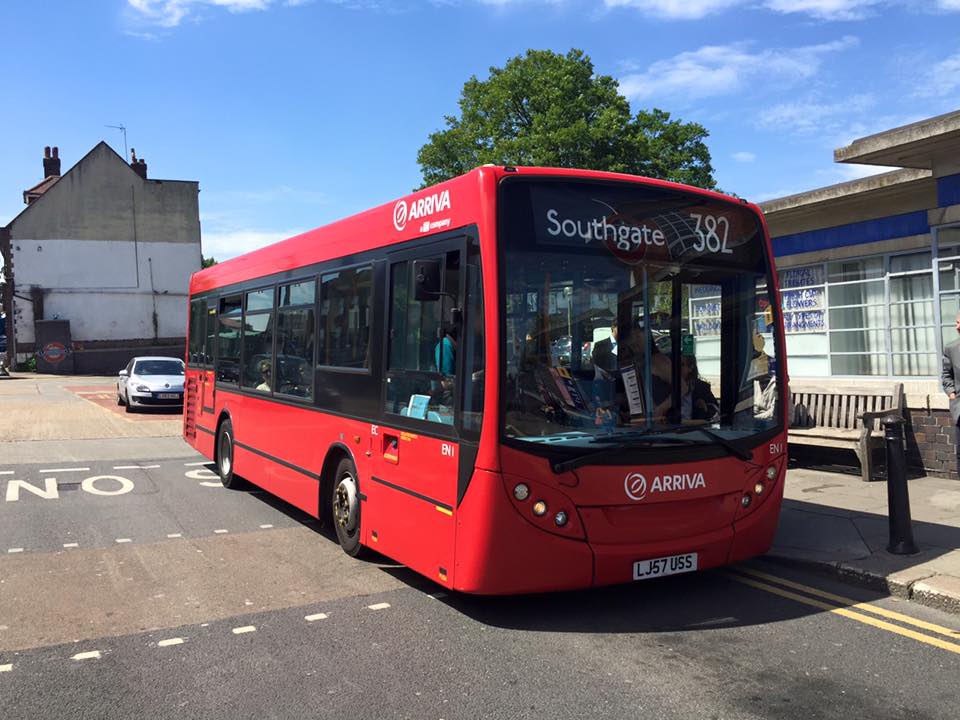 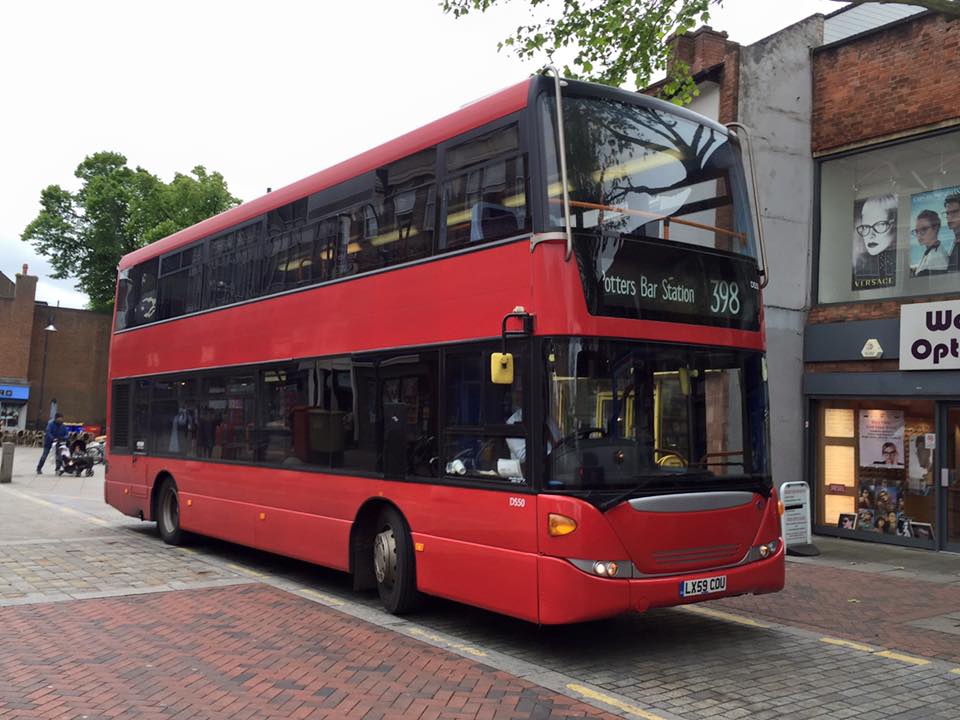 Back out and about on Tuesday 2nd June, I had a day out across north London, and parts of South Hertfordshire. So, from WGC to Potters Bar by Great Northern train, Sullivan Buses newly-extended 398 to Watford via Borehamwood and Radlett, Arriva The Shires 258 to South Harrow, London Sovereign 114 to Mill Hill Broadway, Arriva London 221 to Turnpike Lane, with the buses fully using Wood Green High Road following reopening this weekend, then Arriva London 41 to Tottenham Hale (although the first bus was turned short, so swapped at Philips Lane), Arriva London 230 to Walthamstow Bus Station, walk via subway to Walthamstow Central Station for the newly-rebranded-but-still-six-minutes-late Overground to Chingford, and a Arriva London 313 via Enfield back to Potters Bar. From there, GN train back to WGC. A full day as planned, and some bonuses thrown in too. Falcon Coaches, some of the minibus operators, and some northern coaching operators were also snapped, alongside all the usual buses in these parts of the world. Even got a Scania, without having to call #cardsubjecttohange this time! The album title – the 221 bus passes the Copthall Leisure Centre in Mill Hill East. The bus stop also bore the title Saracens Shuttle, as the Allianz Park of Saracens rugby union team is right behind. 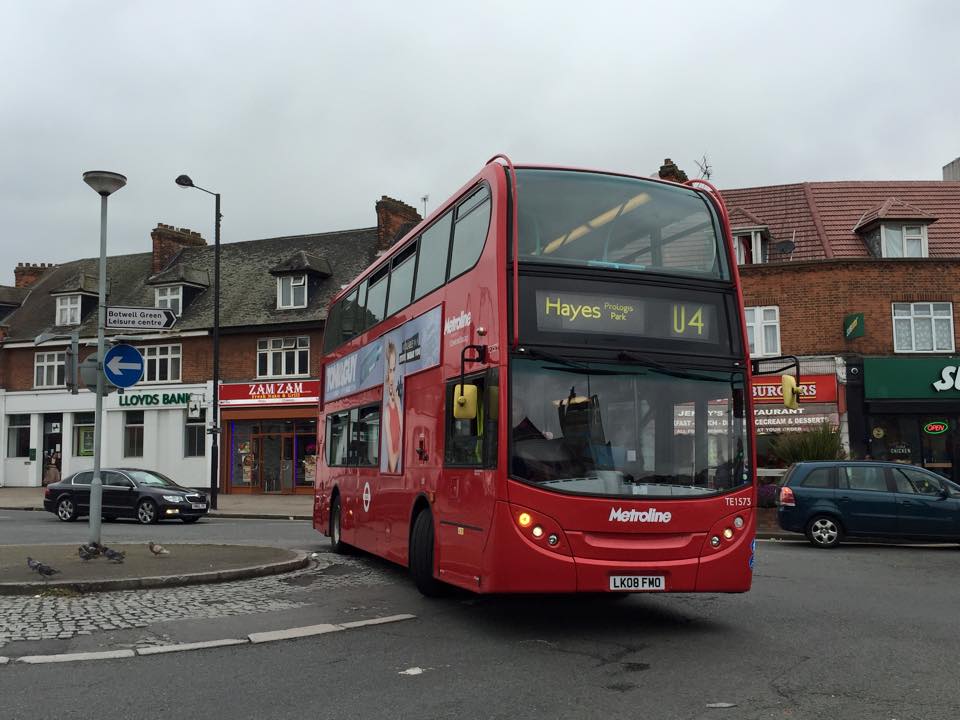 An afternoon in London that turned into pretty mch anything goes! So, Great Northern from WGC to Kings Cross, Circle Line to Paddington, First Great Western to Greenford (hence title and previous album series ending!), E6 bus to Hayes, 90 bus to Hatton Cross, 203 to Hounslow…. instead of heading for the Piccadilly Line there I spotted a Scania on the 120.. so, Card Subject To Change! 120 bus to Northolt, 140 bus to South Harrow,, dinner at TFC, and then the Piccdilly Line to Finsbury Park, then GN again to WGC.

Tuesday 12th May 2015 – The Adventures of Horseheath Green 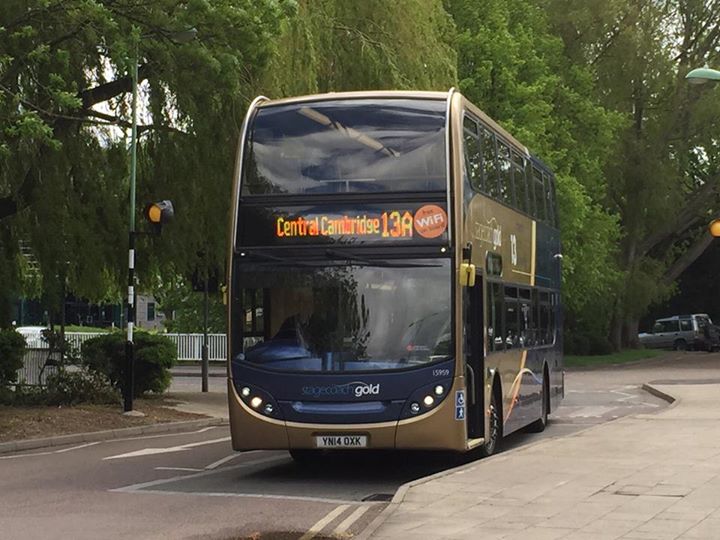 An appointment at Addenbrookes Hospital, and I had the time before hand for a long-overdue visit to Haverhill. First time I’d been there since 2007. The main road 13/13A – via Linton and Horseheath,Green, hence the title! – is operated with newish Gold-branded E400’s. Some more photos from the Bus Station, with a few more from Cambridge/Addenbrookes. 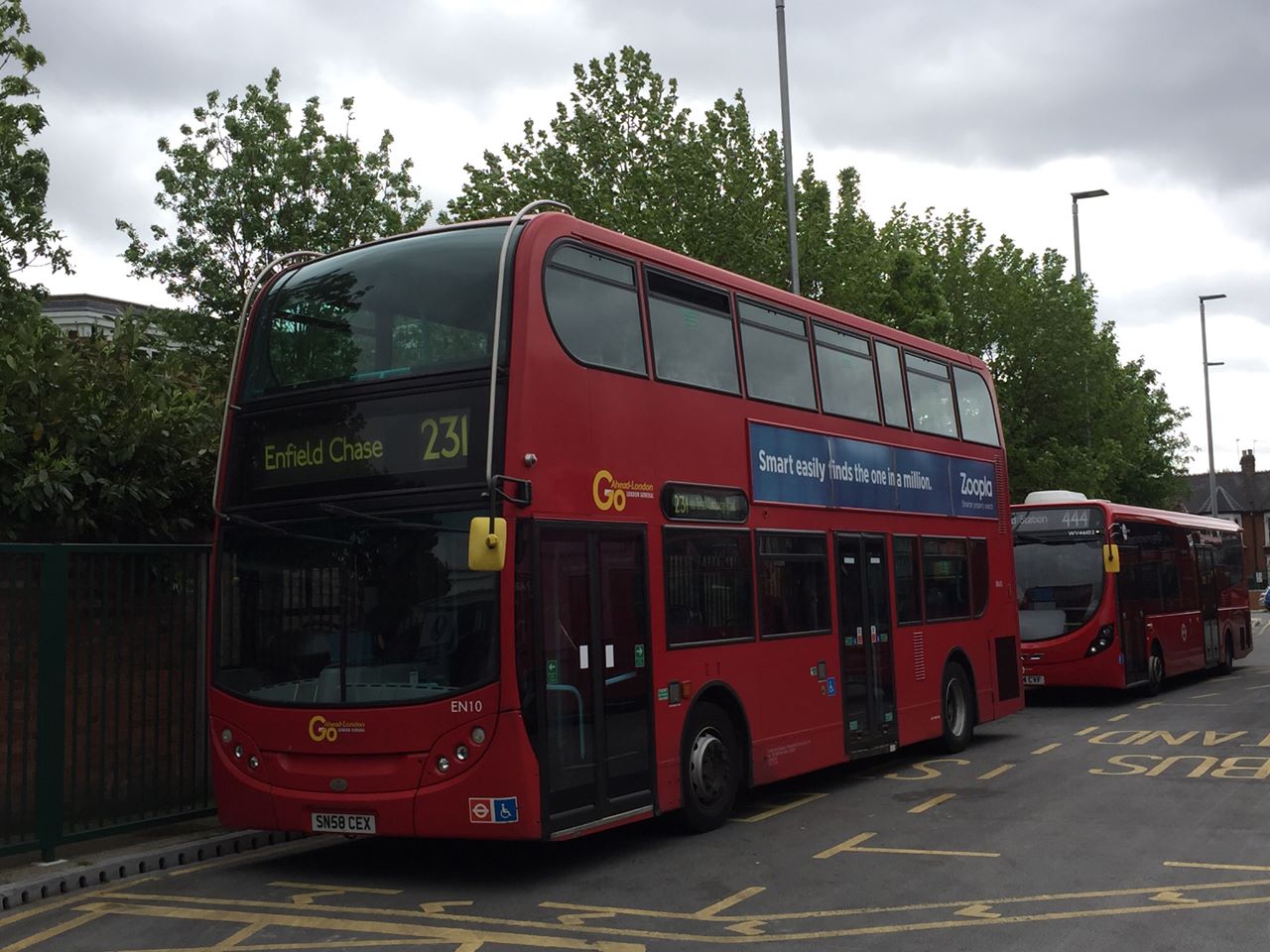 Another trip, this time even further east in London, to catch up on what I missed last time. As I use the phone for a camera, and music and the rest, the battery takes a pounding, but I couldn’t find the power bank! So, this was another day, but first stopping to pick one up! (Yesterday I had a small keyring one, but that’s not enough power for one day!) So, Great Northern Rail from WGC to Hornsey station, DW549 on the 41 from Hornsey to Turnpike Lane/Wood Green High Road, stop at Maplin to pick up new power bank, then… Piccadilly Line from Turnpike Lane to Finsbury Park, Victoria Line from Finsbury Park to Highbury & Islington, London Overground to Canada Water – which I fancied for a photo stop as I can’t remember when I was there last. After there… plan was a Jubilee Line to Stratford, but decided to use the bus! So, Abellio 9045 on the 188 to North Greenwich, getting some more photos there, before the London General LDP273 on the 108 to Stratford bus station. Some photos and lunch, before the direction of the next bit changed to anti-clockwise… as I spotted a Scania on the 473 (there were a few on, and the 238 as well today!), decided to go to Canning Town via the docks! So, Stagecoach Scania 15083 on the 473 to London City Airport, Blue Triangle 886 on the 474 from City Airport to Canning Town. Then first time on the combined 5/87 which has been just a 5 for some time now! Stagecoach 17959 on the 5 from a rebuilding Canning Town Station, to Becontree Heath. From there, Arriva VLA140 on the 128 through to Clayhall/Claybury Broadway, Arriva DW317 on the 123 to Tottenham Hale’s rebuilt bus station (will come back for this and Walthamstow Central another time!), and Arriva DW462 on the 41 along West Green Road and Turnpike Lane (hence album name) to Hornsey Station, for another GN train home to WGC.

Friday 8th  May 2015 – The Adventures of Michael Green 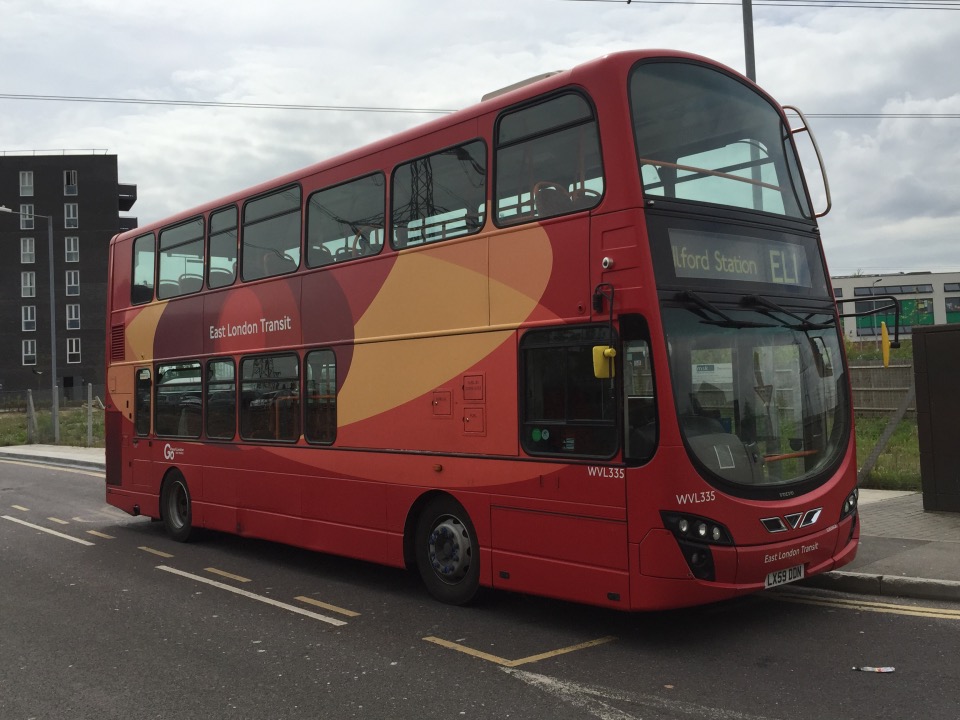 Following Monday’s adventures which I called The Adventures Of Edmonton Green, this one is so called following the second name my local MP used for a second undisclosd business. I’d still not been for a bash on the East London Transit Project – shocking I Know but remember my first journey on the “new” 135 was only last year! So… GN train from WGC to Harringay Stationy, W5 bus from the road end of the station to Harringay Sainsbury’s just off Green Lanes, London Overground from H G L station to Barking, then EL1 to Barking Reach/Riverside, 387 to Barking Station, 366 to Triangle Retail Park, another 366 then onto Beckton Bus Stn wasn’t appearing, so some Scania thrash on the 262 instead – no bad thing down an A road! – before the Docklands Light Railway Beckton – Shadwell, then Overground Shadwell – Highbury & Islington, for a train home. Photos from many locations.

Monday (Bank Holiday) May 4th 2015 – The Adventures of Edmonton Green 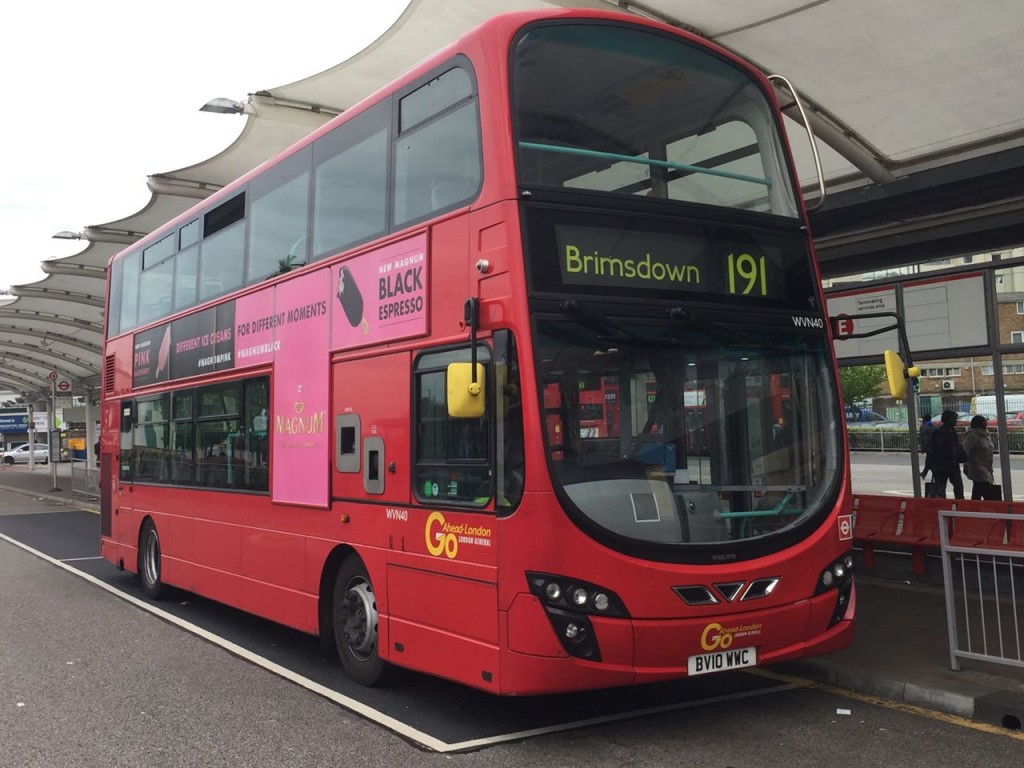 May Day Bank Holiday means local buses run a Sunday service, and the trains to a Saturday service, more or less. So, for this Monday, Sunday extension of the 242 from WGC to Waltham Cross (rerouted and retimed and changed hands to TrustyBus since my last trip), Go Ahead London 491 to Edmonton Green, then the same but a 259 to Finsbury Park, for a Great Northern train home to WGC. Photos from WGC, WX and EG. 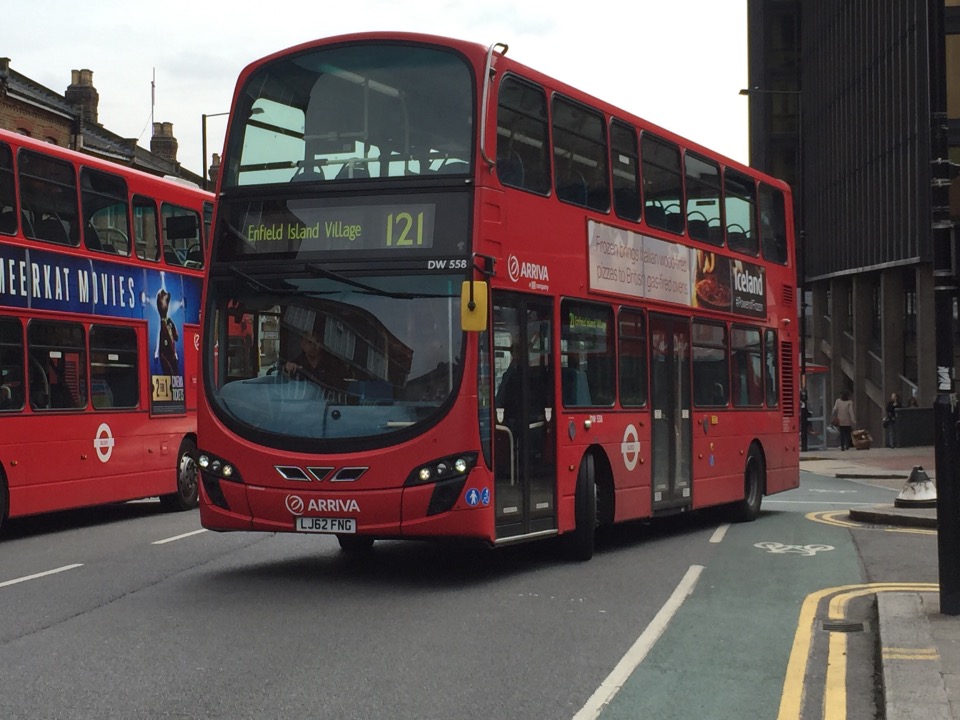 To continue where I left off on Thursday… train WGC – Alexandra Palace, walk downhill towards Wood Green town centre/shopping city – sorry now The Mall Wood Green! A few items at Wiko before getting a 121 onto Southgate, 298 to Potters Bar, and then a train back home to WGC. Another part of the area where I stayed in 2000-2002. 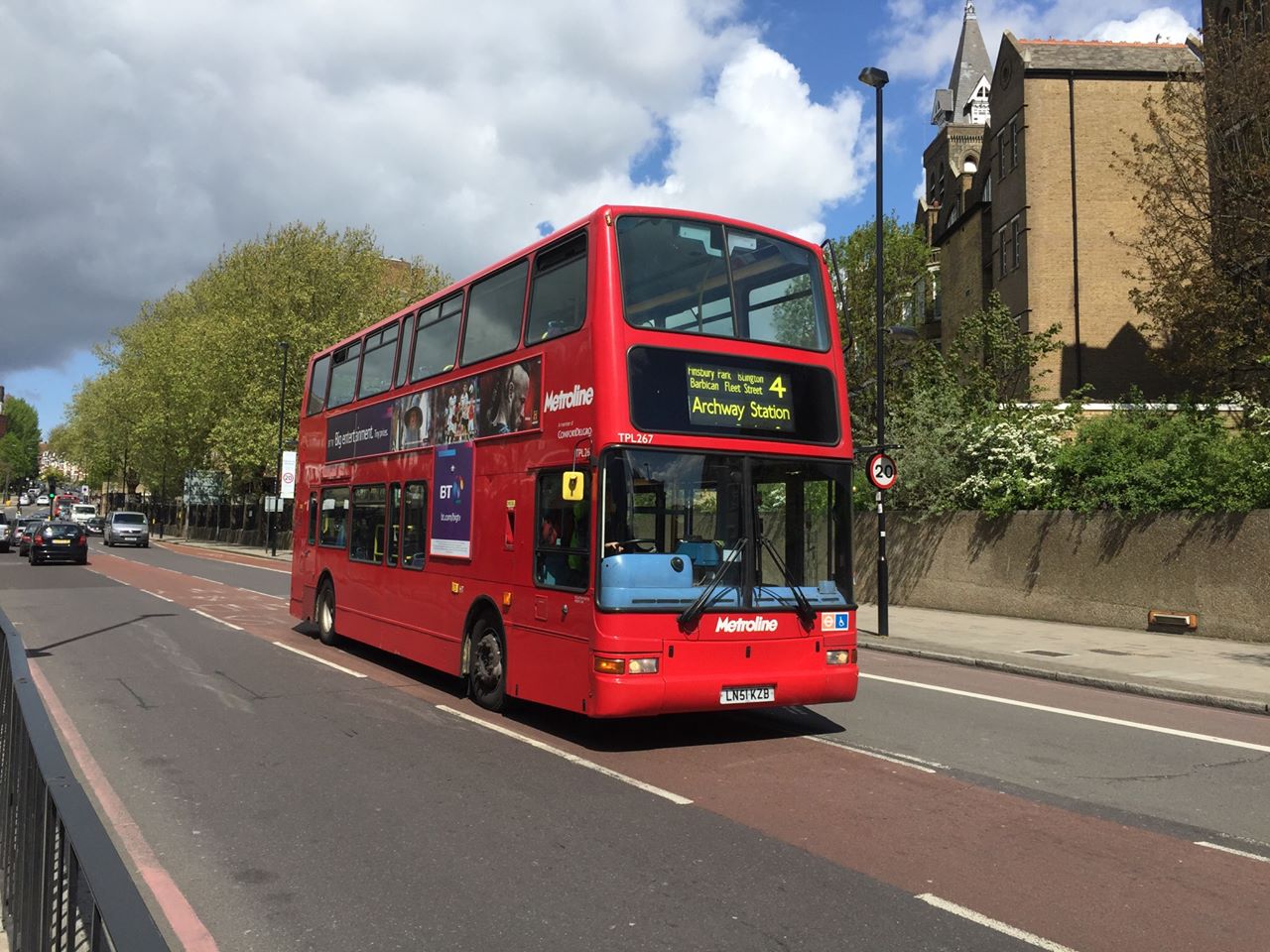 To paraphrase Moose T’s “I’m Horny” in this album… so, from WGC to Archway to do Service 4, via train to Hornsey and then bus 41. Some photos from the top deck of the 4, including Holburn services on diversion, them changing to a 15 at Aldwych. From there, along the Strand for a couple of items in Ryman (found!!!) before then taking the 29 to Wood Green. Some photos there before I headed home – will be back another day to go onto Southgate and Potters Bar – so took the W3 to Alexandra Palace station, train from there to WGC. See I’m Hornsey, Part Two, for the continuation two days later, with more Wood Green shots before continuing to Southgate and Potters Bar. 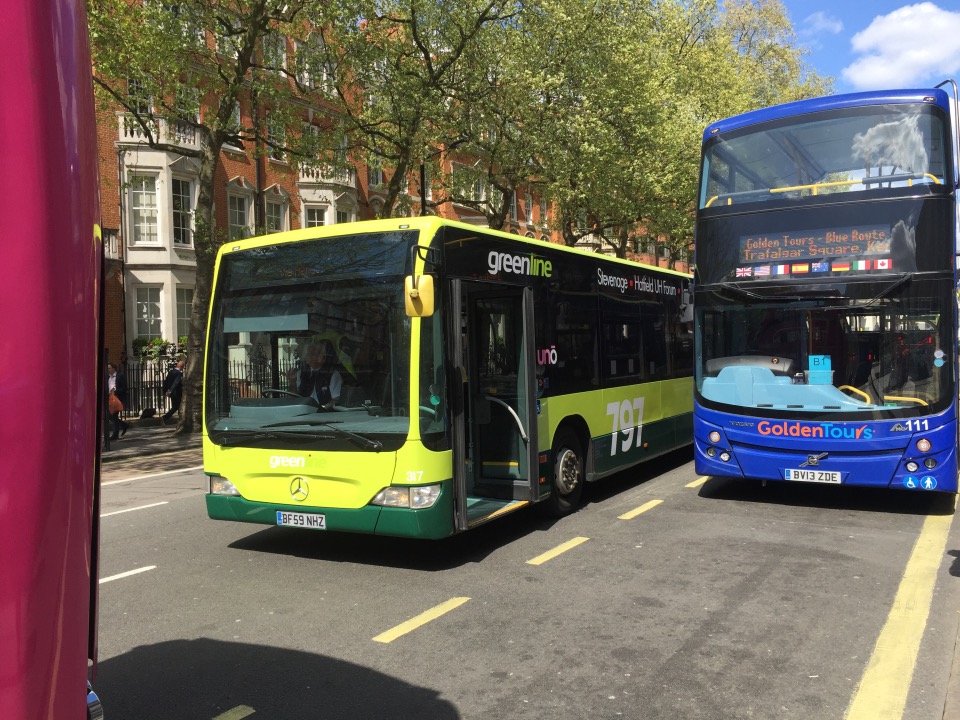 A trip into Central London to try Uno’s take on the 797, and then get a few things done while I was in own. So, Uno Hybrid Solo on the 653 from WGC to Hatfield Forum, Uno Citaro 797 (arrives as 635) from Hatfield Forum to London Victoria, then Go-Ahead London Citaro on the 507 to Waterloo, then an Arriva T on the 341 to Essex Road Station for a train back to WGC. 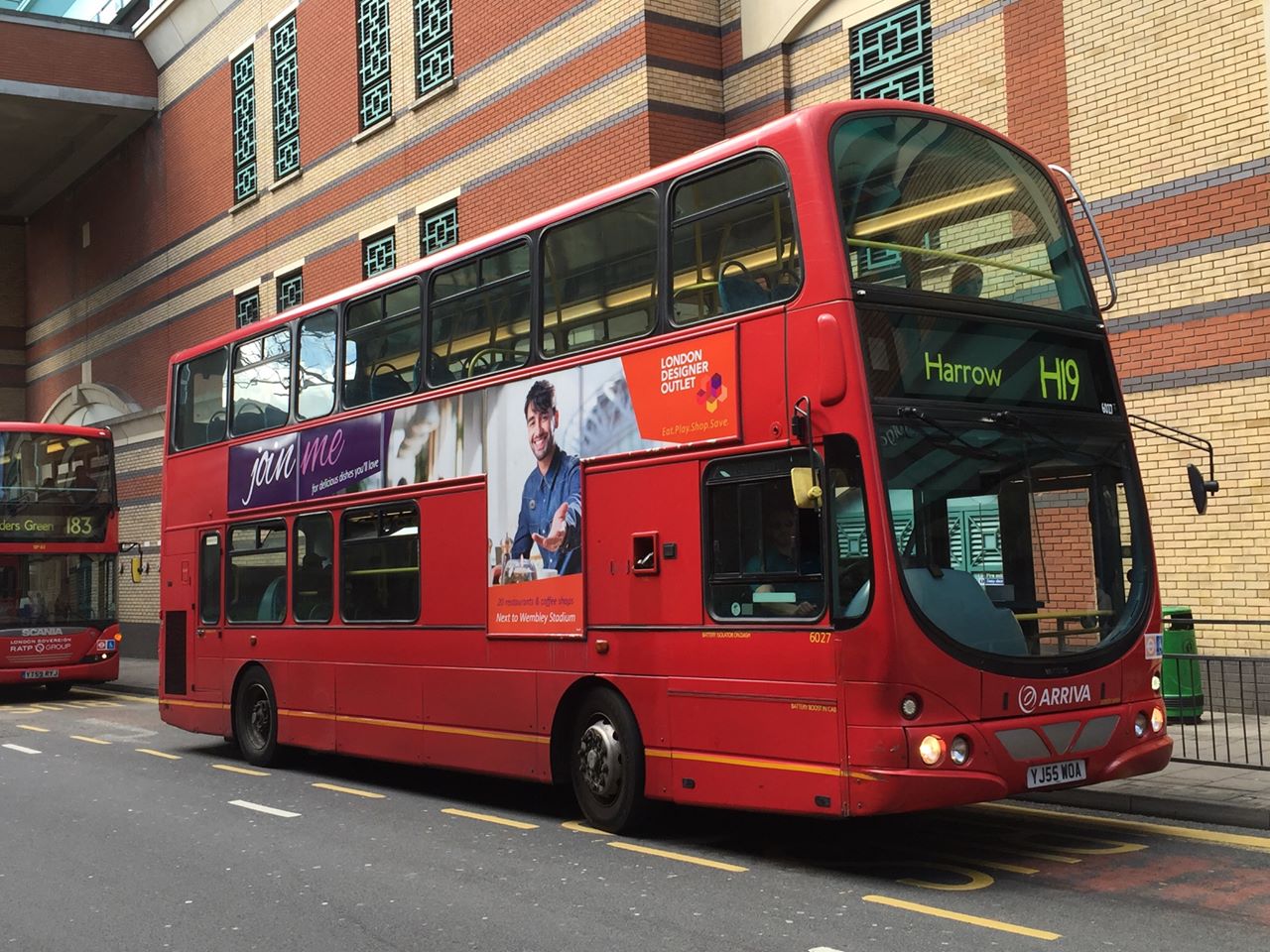 An afternoon out in north-west London… some routes I’d not been on for a while, and four that used to be single decks. So…. from WGC to Hatfield Galleria on the 724, then to Edgware on Uno 614 (Saturday route via Bishop’s Rise), to Harrow Bus Station on Metroline Service 16, then a Sovereign Scania on the 183 to Golders Green, Metroline 210 to Finsbury Park (where I passed through last Sunday on route to Koko for ICW’s Alex Kidd In London, hence the album title), and then a train home. Photos from all location. 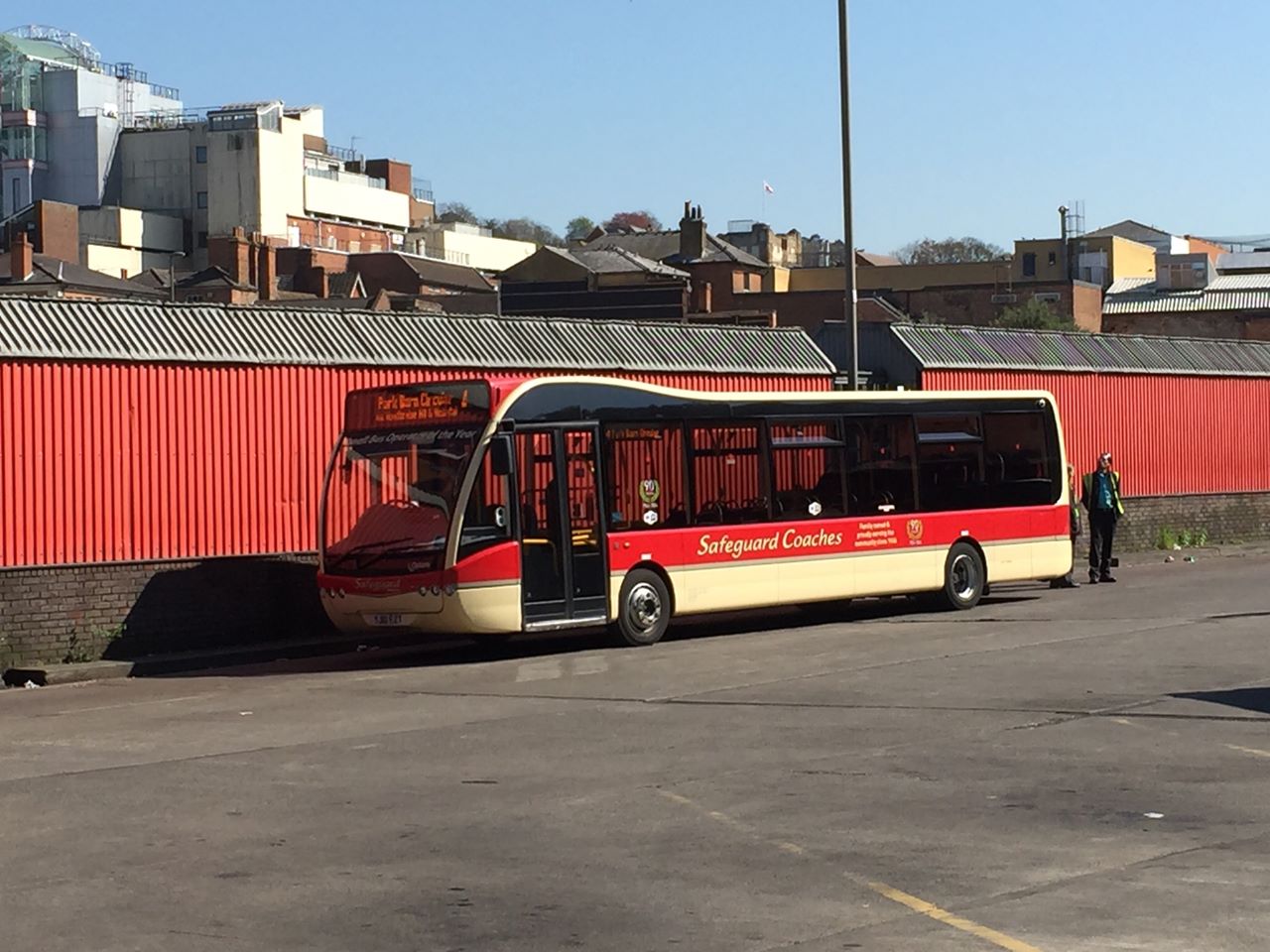 This day was inspired by something Caroline said on Wednesday night, “you don’t do as many long days out as you used to..” So as a result, WGC on Great Northern Moorgate stopping train to Highbury & Islington, Victoria Line to Vauxhall, cross over for South West Trains to Kingston, Abellio 515 to Guildford (drives through East Molesey, which is one reason for the use of the parody of the OCS album title in the photo album name – see http://en.wikipedia.org/wiki/Moseley_Shoals if unsure !) then Arriva 34 to Woking, Abellio 557 to London Heathrow Airport Terminal 5, Abellio London 350 to Hayes/Fairey Corner, then Metroline 140 back to Heathrow Central Bus Station, then some time for photos before my 724 back to Welwyn Garden City. The run to Hayes was just a dinner-inspired run through my old stomping grounds, but it did also bring a fair number of chances for the new EnviroE40HMMC’s, especially from the front top deck! Some photos (only four at Woking) from each location from Kingston onwards. The first few are at an eating/entertainment complex that was built on the site of the former Kingston Bus Garage, but it is also directly opposite my lunch stop, and Kingston’s Cromwell Road Bus Station. 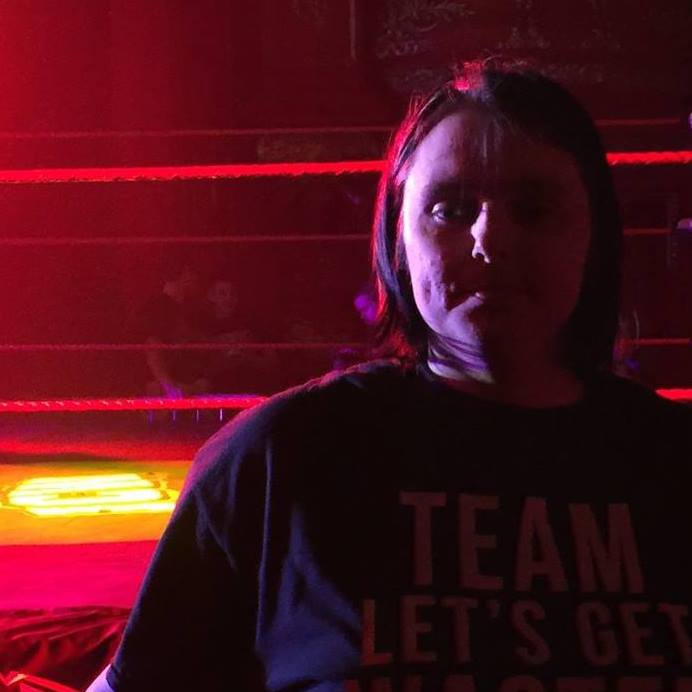 Insane Championship Wrestling finally comes back to London! After missing out on tix the first two,  I have a chance tonight!

From the former Camden Palace, Koko in Camden Town, London;

ICW World Heavyweight Championship No.1 Contenders Match – Damo vs. Dave Mastiff (winner to face winner of next match at some stage of the future) 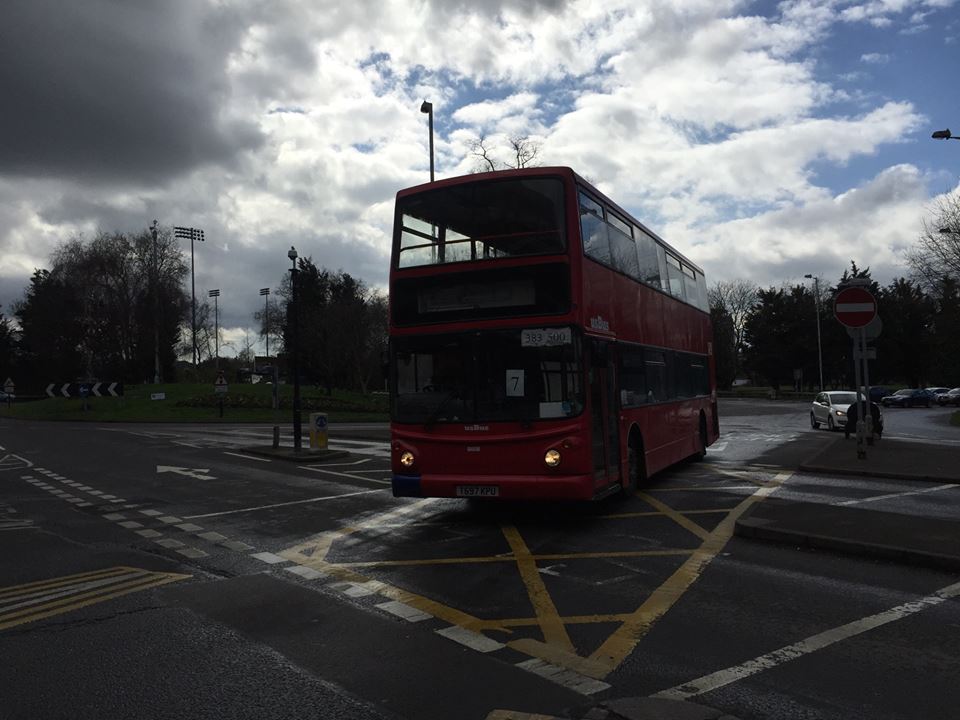 Some more from Harlow, before and after a visit to Chelmsford. 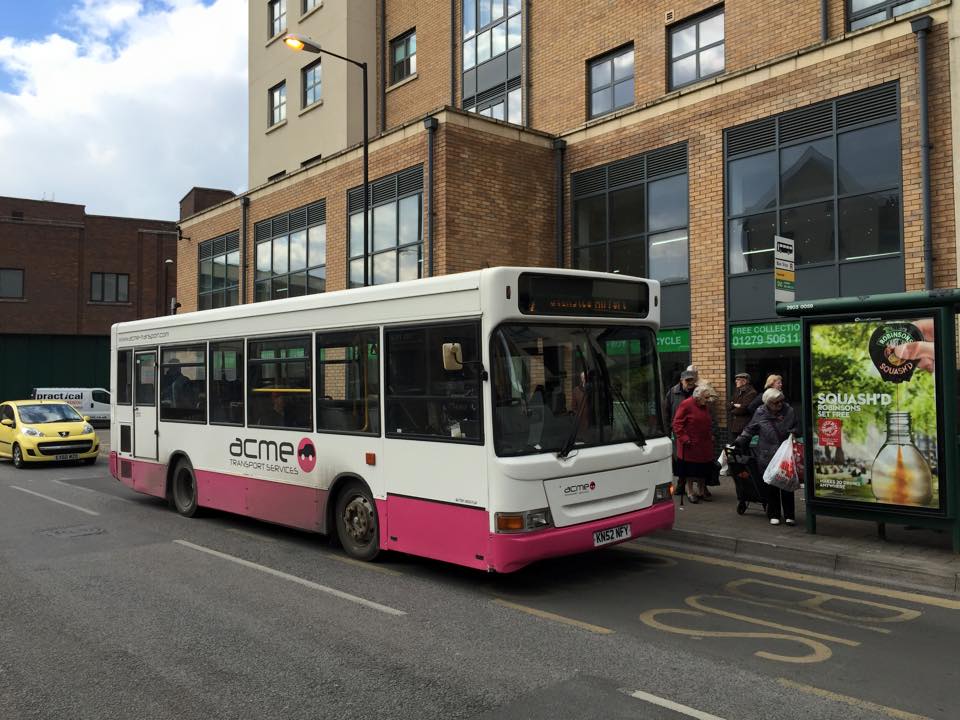 A “Fact-finding” mission… well timetable collating! It’s been quite a while since I’ve been out to SW – so 724 to Harlow, 509 to BS, 301 to Saffron Walden via the main drag, 6 to Stansted via Thaxted, 700/635 from Stansted to Stevenage, then 301 back to WGC. Quite a few interesting finds, a chance visit to the market day in SW, a chance to have a final go on the Uno operation of the 700 (it’s to be Centrebus from next week), and a good day was had! We were late back through Hitchin following an RTA, but there were no other problems of note today. Nice day away from the “office” 🙂 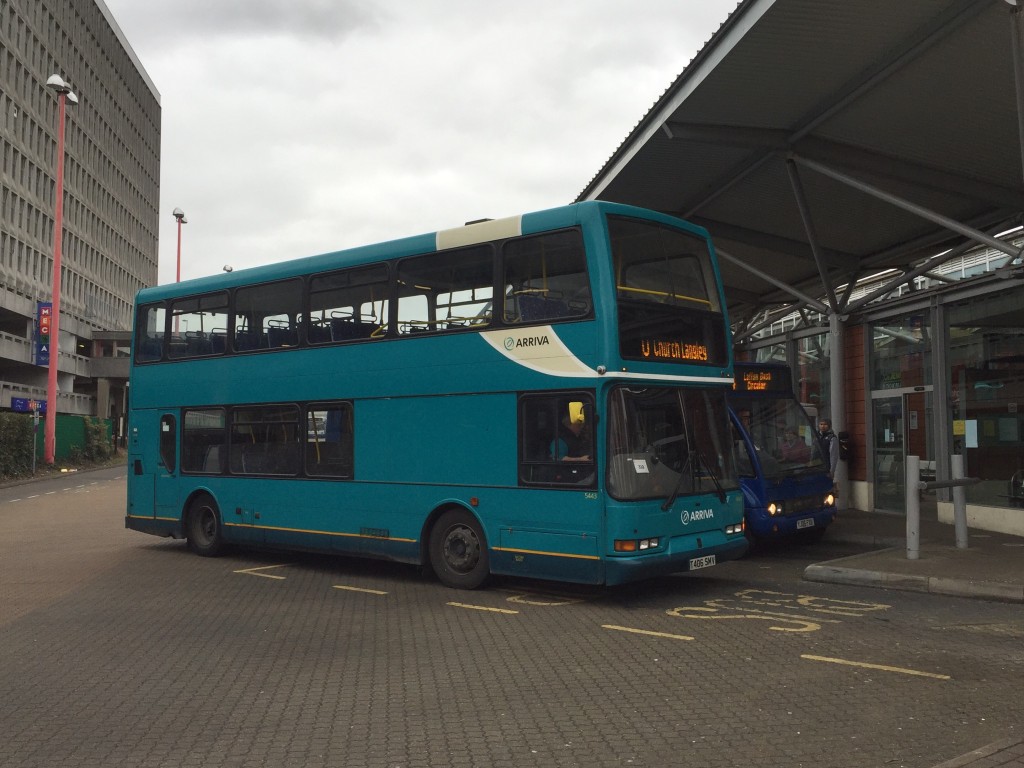 Saturday quick snaps in the cold from Harlow. 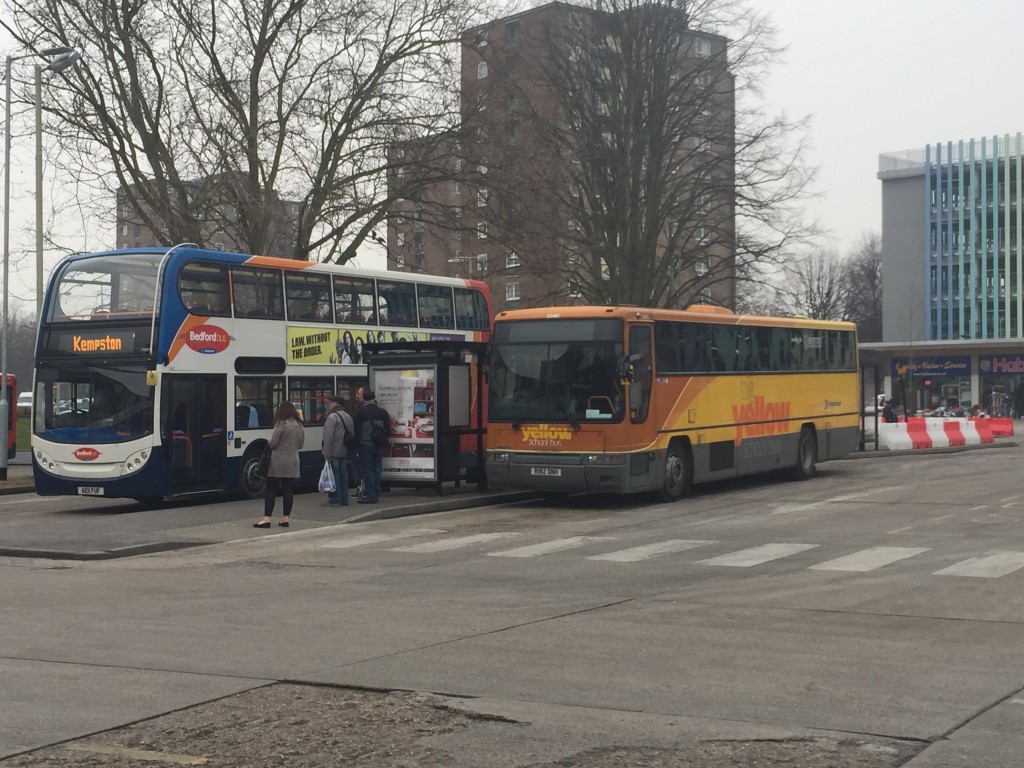 Meeting my BABUS colleague for our new brochures, also used the time to grab some snaps. The latest date for the bus station reopening is the 29th March 2015. These images are further to some earlier shots from just six weeks ago, in the BABUS newsletter that went out yesterday. 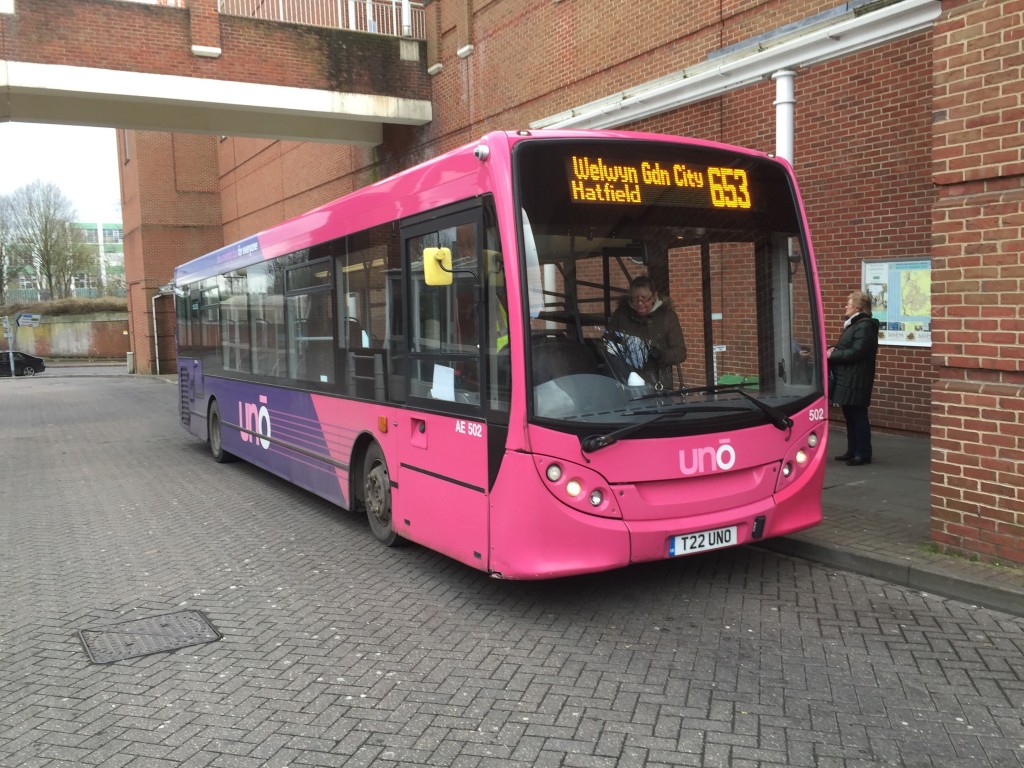 Was thinking of a longer day, then thinking of staying home. So took some painkillers and headed out! 388 from WGC to Hertford, a few thins from shops and the market, and a bite to eat at the ‘spoons. 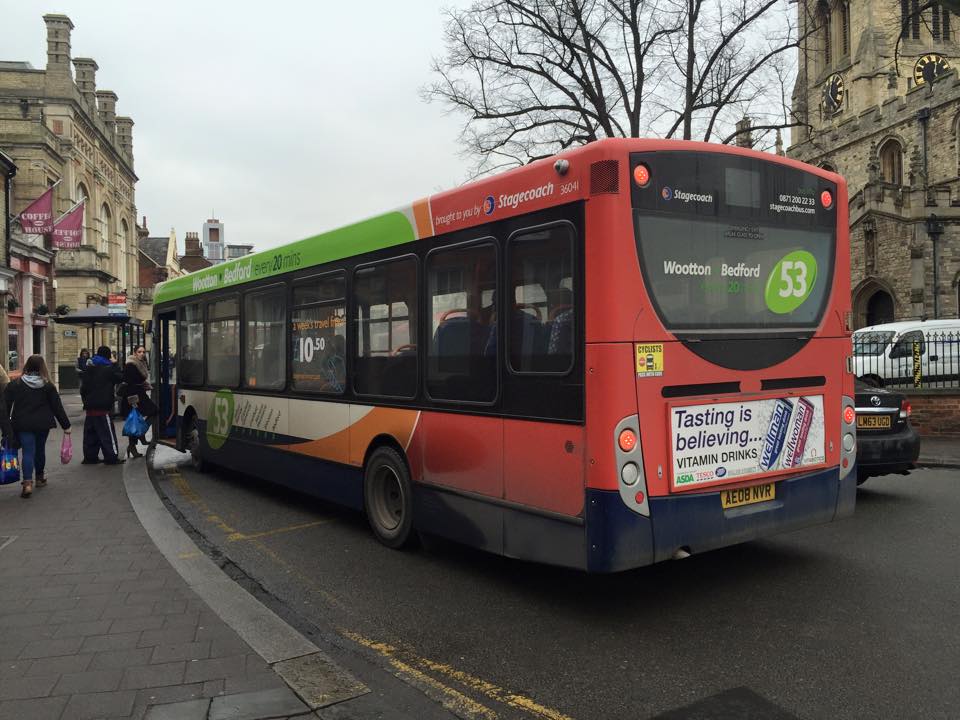 Some pics after a BABUS committee meeting. Almost the end of the Bus Station refurbishment. 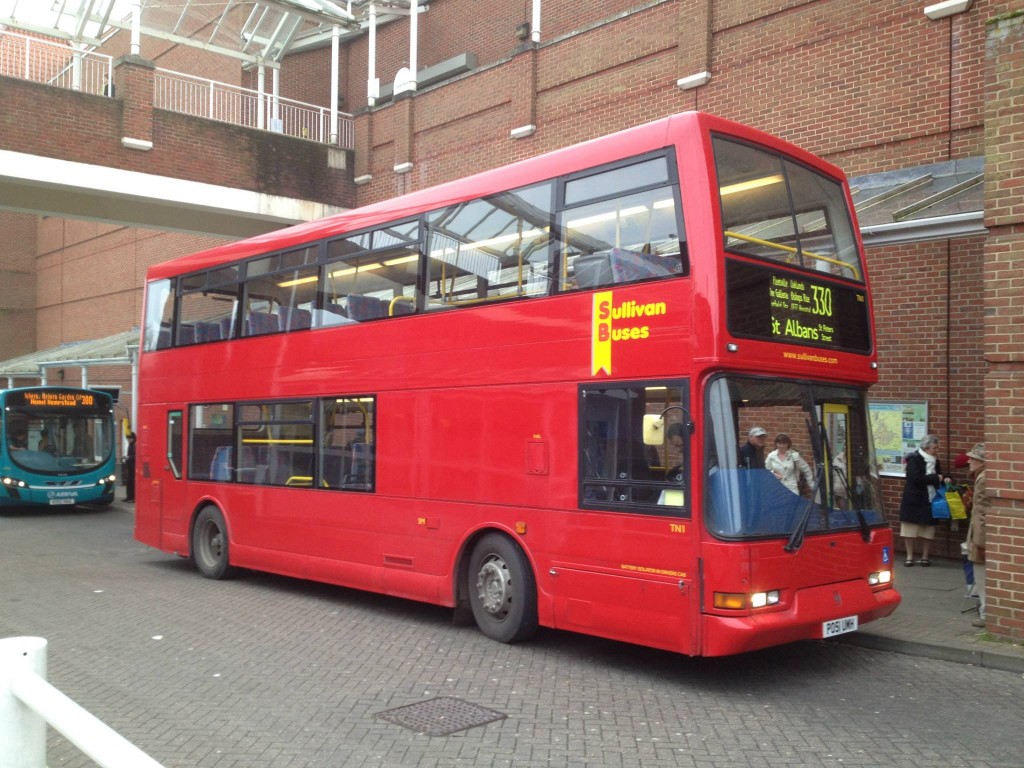 Friday 16th January 2015 – my birthday! I’d been out on Saturday past last, but didn’t have the time to get back to Luton after Watford. So headed there today, then Dunstable for a few things from the Travel Choices Hub (Not open at weekends). So, 366 from WGC to Luton, X31 to Dunstable, then the first time on the 34 to St Albans before the 653 back to WGC. After the bus photos, you will find some of the cards and gifts I received – many thanks everyone! 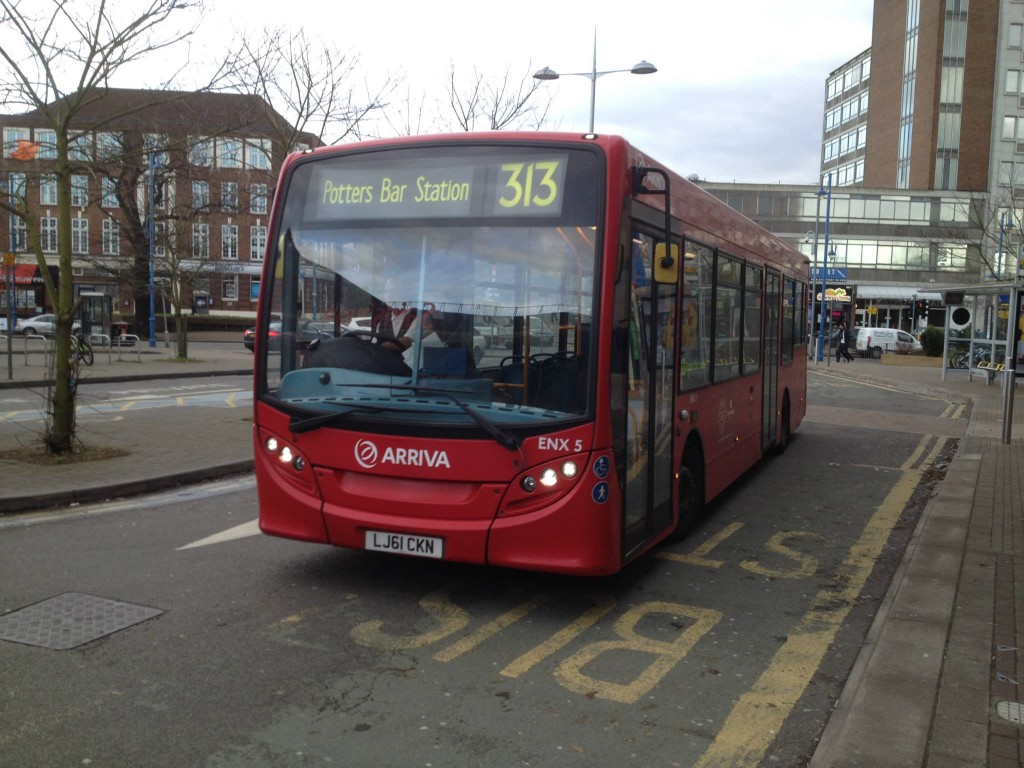